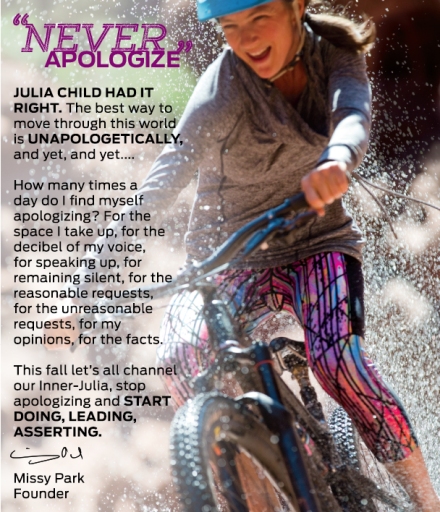 Recently I came across this ad, note, whatever you want to call it from Title Nine’s founder. (Title Nine clothing). I was sucked in by the beginning quote: “Never Apologize.” I for one do not have the easiest time apologizing. So, of course, I wanted to read further. I did and I was inspired. It made me want to go out and be active, yell at the top of my lungs, take a stand for others, the list goes on. Yet, this is more than that – this is more about living life to its fullest and never feeling bad, guilty, or sorry for your thoughts, actions, or feelings.

I am loud. I take up space. I hate remaining silent. I voice my opinions. I am not going to stop.

This post today is to encourage you to never apologize. As Missy says: Do, Lead, Assert. Bring it.

The sensational news these past few days. We go between the struggles of watching the earthquake in Nepal, to riots in Baltimore. I said to Chris while we were eating dinner last night that I feel like I am in the early 1960’s. Why is there so much struggle with race, color, and violence? Such different issues in different parts of the world. In Nepal they did not ask for an earthquake and yet look at how the world is coming together (as often happens with natural disasters)? I received a notice from my company to donate, Facebook reminds me, there are mentions all over social media to donate and support the victims of this massive earthquake. We donate because we care. We donate because we know one day we could be in a similar situation. We donate because that is what we do — we take care of others.

Why then do we then see the juxtaposition of rioting, looting, fires — a war zone in Baltimore? How is it that we can see such generosity and such anger? Both situations have a result of pain, but different triggers of that pain. I am not going to even give my opinion one way or other as to the situation that occurred to cause this anguish. I had not actually followed what happened. What sparks my interest are the actions of those that are reacting. How is that living a non-violent approach? The police officers in the earlier incident could have very much been in the wrong, and it could also be a misunderstanding. It makes no sense to me that the result is that individuals feel they can damage liquor stores, throw bricks at cops, and burn and destroy public property. It completely diverts from the actual original issue. Others no longer see what actually happened. The issue is lost because all the people can see (my view completely) is their reaction.

It reminds me of a kid that does not get their way. What do they do? They throw a temper tantrum. They lie on the floor and keep their feet and whine and moan. Sometimes they use violence by kicking their parents or a sibling. Sometimes they might punch a wall, break something, or destroy an object to prove their point. Basically, I watch what is happening in Baltimore and what was happening in Missouri and I think stop it all. Stop acting like children. Stop with the news frenzied temper tantrums. Grow up, use your words, and make change in other meaningful ways. Ways that have a lasting effect.

We all have those days when we want to pitch a fit, but deep down we never want to steal, destroy, or hurt someone else. We want to be seen and heard. The individuals in Baltimore may be acting out because they feel an injustice has been done. They want to be seen and heard. Yet, there is a part of me that feels they do it because they can. They do it so they can try to prove a point, but in turn they lose a lot of credibility. In the words of many parents, I just want to yell: “Use your words.” We have got to stop this violence and instead put our focus on Nepal and other areas of the world that truly need our help.

I am someone who has incredibly high expectations. I am not sure when in my life it happened that my standards became so high. I was joking with a few colleagues the other day about how I was raised and how my dad used to vehemently remind us to do it right the first time. I know there are many ways of looking at the world, and that making mistakes is one where we learn the most. That, however, was not how I was raised. I distinctly remember a few specific examples. One time my sister and I were asked to clean our room (we shared a room). We cleaned it, but not to my dad’s standards. When we got home from wherever we were that afternoon, we walked into our room and found every drawer of our respective dressers empty, and every desk drawer empty, and the contents of our shared closet all sat in a massive mixed pile in the middle of the room. I remember him barking some sort of comment to us: “Maybe next time you’ll do it right the first time.”

I was horrified. I do not remember how long it took us to clean it up, or what my sister and I discussed during the process, but I will never forget what my room looked like that day. Now, I can think about a million other ways to get through to kids, and whether my dad was right or wrong, he was definitely creative about getting our attention. He also was a bit scary. I do think his “get it right the first time” mantra in some ways made me use problem solving tactics and critical thinking skills at an early age. You see, my dad could turn a million different ways and I had to be prepared for it, so I thought: “if I do this, what will be the outcome?” or “how about if I do that?” I was not always so savvy to be prepared for how he might react, but I was definitely aware of the consequences of my actions. Never mind that I probably should have just been out playing.

There was another occasion when it was my chore to scrub the bathtub, specifically the soap scum ring. On one occasion when my dad inspected the bathtub (it was a pink bathtub too), to see if it passed his inspection, he decided it was not clean enough and that I needed to start again. In order to ensure I would have to clean the entire bathtub again (and not just work on the soap scum) he poured ketchup into the tub. Again I was horrified. I just wanted him to show me where I missed a spot, and give me a chance to fix it. Starting again felt so unfair. Maybe that is why I detest cleaning the shower/bathtub (thank you Chris).

Did my dad ingrain in me the desire for higher standards? Maybe. Did he know he was doing it? I do not think so. I think I am a by-product of finding creative ways of knowing I had dotted all my i’s and crossed my t’s. I had a backup plan for my backup plan. My brain constantly looks for all the different scenarios and which ones to stay away from and which ones lead to the best possible scenario. It has helped me at home and in my professional life. There are way better ways to teach critical thinking skills and to learn consequences for different choices. I will not be passing on the ways of my father. 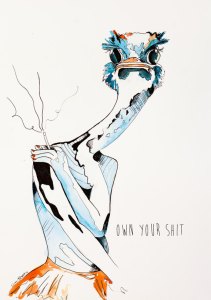 I found a print over the weekend via the fabulous, Elizabeth Gilbert that sums up what I think about a lot of things. It says: “Own your Shit.” I could never frame it and put it on the wall, as it has a bird on it, and I am not a fan of birds. I like the print because it says what I constantly have running through my head. To me “Own your Shit” means bring yourself 100% to your job, relationship, family, wherever in your life. Know who is counting on you, know what is expected of you, and bring it.

I struggle a lot with others that do not take accountability for their actions. If you say you are going to do something do it. Follow through. Think about the individual on the receiving end of what you need to do. Does your not following through leave them hanging? Does it make them look bad? Does it tell them you do not care?

Whatever story you are telling yourself for why your life is more important, or what you need to do is more important than honoring your commitments, it is bullshit. Do what is your responsibility to do. Do not expect someone else to do it for you. Do not take the easy way out. Own it. Know it. Be it.

My new mantra: Own your shit.

I have been thinking a lot in the last week about awareness. Being aware. Watching. Being present. After a few day training session at work, I realized how much more I could be aware of my surroundings, my actions, and how I approach situations. Last Friday I specifically practiced awareness, and while yes I was only in day one, I had a very good day. It could have also been because the sun was out, which means that those I was around were in a great mood. Sunshine in Portland in February does that to folks.

Regardless, I focused on listening in each conversation. I stopped, slowed down, and was aware and I enjoyed the day so much more. Sometimes that means I am more focused in my listening, other times it means I quiet my mind and do not say all the things that are happening within it. I am an extremely direct and transparent person, but I am learning that does not mean that I have to say everything that comes to mind. Part of being aware is listening to see if the person you are interacting with needs to talk and share from their own minds.

As I learned last week, awareness takes practice. Just as an Olympic athlete must train every day, so must each of us as we continue to be better and better, or as we continue to learn how to be our best. All we can do is try again each day. Try to be more aware, more present, and listen more. I love a line from this Fast Company article titled: “How One Simple Change Can Make You A Better Listener.”

“When people feel as though they have been heard, they trust you more.”

“Ultimately, the ability to extract what people mean from a conversation is one of the most important tools of any leader. It takes a lot of work. And it requires curbing your natural tendency to jump right to a solution to people’s problems.”

I have a lot of work to do. I need to resist my constant urge to find a solution to problems, and start by listening first. Here is hoping I can keep up with my awareness this week. Listen more. Be more aware. Are you with me?